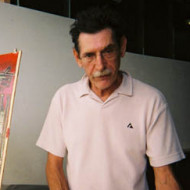 Edward Koumans was born 1946 in The Hague, Holland, arriving in Australia with his family in 1949. He lives and works in Cairns, Queensland.

This user has not added any information to their profile yet.

Koumans is one of Far North Queensland’s favourite artists, delighting collectors and artists for over two decades with his witty, ironic and sometimes sinister figurative assemblages and paintings.

In the tradition of assemblage sculpture, Koumans presents figures constructed from everyday flotsam and jetsam. Mementos of times gone by and ethnographic fragments, discarded odds and ends take on new life as distinctive figurative sculptures.

Koumans’s paintings have a primitive figurative style. He uses an open brush technique and scrapes back through wet paint in a drawing gesture. His new paintings on paper and canvas and distinctive figurative sculptural works, reveal the artist’s current immersion in the subject matter of birds.

My artwork for sale